The RemoteIO unit of the node has a client side (for the node) and the “outer” side (host, or hardware if not connected to host).

In this document, the RemoteIO unit is called RIO and the Remote AudioUnit (the IAA node unit from the host perspective) is called RAU. 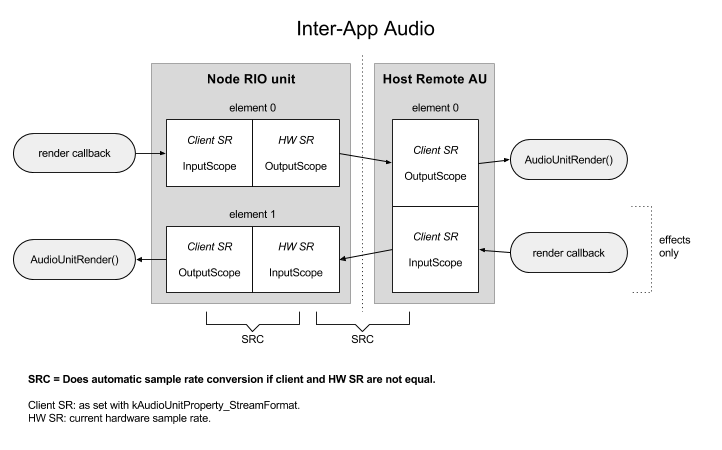 The “outer side” of the nodes RIO unit is always fixed at the current hardware sample rate.

​A host must init its RAUs using the hardware sample rate in its client format, by setting it on the client side of the RAU (input/output scope element 0), which is connected by IAA to the outer side (host or hardware) of the RIO unit from the node’s perspective. Not using the hardware SR when initializing the RAU will fail with kAudioComponentErr_InvalidFormat.

When the hardware sample rate changes, the host should update the client side format of hosted RAUs, or else iOS will automatically insert sample rate converters - leading to unexpected buffer sizes and loss of audio quality. It’s a bit weird that iOS allows sample rate conversion in this case, but not at RAU initialization.

The node can detect and follow the hardware sample rate, or it could ignore it (as most IAA node apps does, currently). When ignored, the RIO unit of the node will do sample rate conversion.

So, there’s two places where conversion might take place: between node RIO client side and its outer side, and between host RAU client side and the node RIO outer side. Note that this outer side is part of the Inter-App Audio mechanism and does not actually belong to either node or host.

IAA host gives current time in samples. Since node and host might run at different sample rates, we must use the host SR for converting to seconds.

The host might change SR after connection. When an IAA host changes sample rate, it must uninitialize all the hosted nodes, change their stream format to use the new SR, and then initialize it again. The IAA node sees this as a disconnect-reconnect, at least most of the times.

NOTE: Using the AVAudioSessionRouteChangeNotification to update the sample rate does not work reliable. It works when plugging headphones and audio interfaces in/out, but most often not when the host changes sample rate. The technique used here catches all situations, also when plugging hardware.

Also note that the hardware sample rate might change even if you’re not currently being hosted, or even if your app is not an IAA node app. This happens when another app using PlayAndRecord category was started before your app, and then the other app changes the preferredSampleRate on the audio session. So don’t use the route-change notification!

The correct way is to use a property listener on kAudioUnitProperty_StreamFormat:

And add the property listener when setting up IAA for our main audio unit:

You would also call UpdateHostSampleRate(inUnit) when connected, a good time is when getting the other data such as HostCallbackInfo and host icon.

Running the node in a different SR than the host is sub-optimal, since it introduces sample rate conversion and odd buffer sizes that changes for each render cycle. It’s better to adjust your sample rate to follow the host, by setting the stream format on both InputScope 0 (for output to host) and OutputScope 1 (for input from host, if the node is an effect) to use the same sample rate, and make sure your DSP code handles the new rate.

This is especially important for IAA effects: The sample rate conversion lead to unexpected differences between input and output buffer sizes (maybe because of an iOS bug), making it impossible to implement a straight signal chain without having to use ringbuffers.

Note that listening on kAudioUnitProperty_StreamFormat (kAudioUnitScope_Output, element 0) covers both the case when it’s connected to host and when it’s running standalone directly to hardware. So we can use this same mechanism to know the current sample rate on the “outer” side, and if we want to follow it: set our own client-side sample rate to match it.